Cedartown will be getting three new restaurants and possibly one more in the coming months.

According to the Polk County Standard Journal, the new Popeye’s quickly rising on the former site of Wendy’s is on schedule thanks to dry weather of late. Expect an opening early to mid autumn for the new Cajun style chicken restaurant that recently opened a Rockmart location weeks ago.

Cedartown City Manager Bill Fann reported in a recent city commission meeting that another chicken joint will open its doors near the Cedartown Walmart in coming weeks. WNB Factory, which stands for “Wings ‘n Burgers”, already has locations in Douglasville, Villa Rica, Carrollton, and others across Georgia. 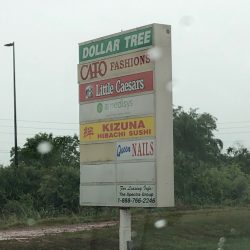 Also, Cedartown residents will have a chance to enjoy hibachi and sushi from Kizuna, which will be opening in the former Los Arcos restaurant, just a few storefronts down from the new WNB Factory and China One.

Fann also hinted at a possible national chain restaurant is in the final negotiations for a parcel in front of Tractor Supply. No word yet on the name of said restaurant.