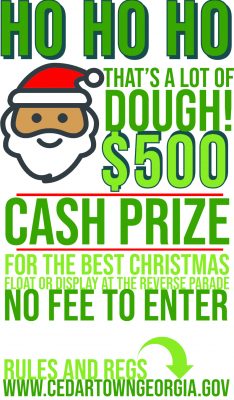 Though the event will look different compared to previous years, the prize money up for grabs remains the same: $500 for a first-place win, $300 for second and $200 for third. There are two categories, open division and church division, and a grand prize of $500 will be given to an overall winner.

Entry forms must be turned in to City Hall by 5 p.m. on December 1. There is no fee to participate. The form and a copy of parade rules can be found at www.cedartowngeorgia.gov

With all City-sponsored special events put on hold this year due to COVID, officials were determined to think out-of-the-box concerning the annual Christmas parade.

As an annual event where thousands of residents and out-of-town guests  gather along a one-mile long parade route, requiring and enforcing onlookers to socially distance themselves from others would be next to impossible. “The parade has always been a huge draw for residents. There’s no way to know what these next few weeks will bring as far as the number of local COVID cases and continuing or new state-mandated guidelines,” said Cedartown City Manager Edward Guzman. “As a governing entity, we are required to follow these guidelines, and so the typical parade had to be modified.”

The results of that modification resulted in the idea of a “reverse parade.” This is an event where floats and displays are stationary and spaced apart, and those wishing for a dose of merriment and magic can simply drive-through and enjoy it from the safety of their vehicle.

The event, slated for December 5 from 6 until 8 p.m., will be set up inside the Polk County Fairgrounds, ensuring plenty of space for displays and allowing vehicles a wide loop of roadway to take in the twinkling lights and Christmas decorations. Santa, of course, has been made aware of the changes and he has agreed to make an appearance as folks approach the fairgrounds exit.

The theme for this year’s event is “Let It Snow.” Churches, businesses, organizations and residents wishing to participate this year are asked to decorate according to the theme.

Entrants must provide their own power (if needed). Electrical access will not be available at the fairgrounds. Floats are of course welcome to participate, but so are displays and live nativities. For more information on the parade, visit www.cedartowngeorgia.gov or call 770-748-3220.