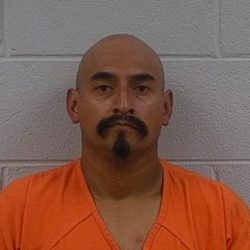 A suspect in the shooting death of a man in the early hours of Saturday morning was taken into custody late last night, according to Polk County Police Detective Brandon Crawford.

Jesse Castillo, 40, of 20 Winter Wood Court, Rockmart, remains in the Polk County Jail this morning after he was arrested by the Bartow County Sheriff’s Office late Saturday night, per Crawford.

Castillo is charged with murder, two counts of aggravated assault, and two counts of possession of a firearm or knife during commission or attempt to commit certain felonies.

Crawford reported that an anonymous tip provided a possible location for Castillo’s whereabouts, and when dispatched to the address Sheriff’s deputies took him into custody without any further incident.

Castillo is being charged in the shooting death of Michael L. Griffith at 599 Clarkwood Road around 3:30 a.m. on Saturday. Police found him in a ditch shot multiple times and he was transported to Polk Medical Center’s Emergency Room via Redmond EMS and pronounced dead at the hospital.

Previously, police had found the work truck that Castillo fled the scene in Cartersville left abandoned as he attempted to elude police.

Crawford on behalf of the PCPD thanked the Bartow County Sheriffs Office, Polk County Sheriff’s, Rockmart Police, Rockmart Fire and Rescue and Redmond EMS for their aid during and following the incident.