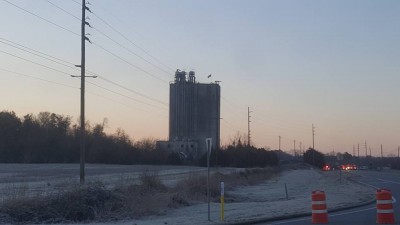 Investigators are due in Rockmart today to try and determine exactly what caused a massive explosion at the JCG Farms feed mill plant early Sunday morning that claimed the life of a Rockmart man.

Polk County Coroner Tony Brazier says that 25-year-old Justin Deems likely was killed instantly in the explosion.  His body was sent to the GBI Crime Lab in Decatur for a complete autopsy.

Meanwhile, a 31-year-old Cedartown man was flown to Grady Memorial Hospital with major burns to his body.  His condition is listed as “guarded.”

Four others were taken by ambulance to a Rome hospital and one was later transferred to a Marietta hospital.

The Georgia Fire Marshal’s Office has requested help from the Federal Bureau of Alcohol, Tobacco and Firearms (ATF) in their investigation into the deadly explosion.

Highway 101 between Marquette and Brock Roads was shutdown for most of the day Sunday as engineers checked the structural integrity of the buildings.

JCG Farms is expected to release a statement on the explosion later today.

According to previous reports, residents living nearby the plant said they heard a loud explosion just after 2:30 a.m. Sunday morning.

One other person was airlifted to Grady Memorial Hospital with severe burns. Four other individuals were taken by ambulance to area hospitals.  Two others at the plant refused medical treatment.

The blast caused significant structural damage to the feed mill.  The cause of the explosion is still not known at this time.