The unidentified female victim was airlifted to Grady Hospital in Atlanta for treatment of her injuries.

Another person was grazed by a bullet but was not transported for treatment.

Police have yet to identify the suspect, who has now been taken to the Polk County Jail.

He is expected to be charged with at least two counts of aggravated assault.

Rockmart Police, along with units of the Polk County Police Department are currently at the residence executing a search warrant to locate additional evidence in the shooting.

The investigation is ongoing.

Rockmart Police are continuing to interview witnesses on the scene of a shooting on Pearl Street in Rockmart.

One of the victims had to be transported via Life flight to an Atlanta area hospital.

Rockmart Police Chief Keith Sorrells says the female victim did not initially seem to be seriously injured as the bullet struck her in the shoulder and went through and through.

We hope to learn more details later this afternoon.

A suspect is in custody in connection with a shooting that occurred Tuesday morning in Rockmart. 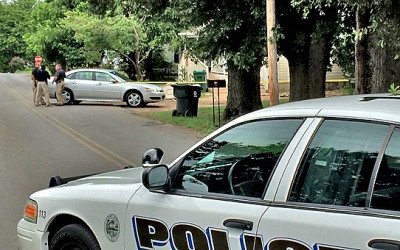 The shooting occurred on Pearl St. in Rockmart at 11:00 am Tuesday

According to Rockmart Police Chief Keith Sorrells, the shooting occurred on Pearl Street just after 11:00 am.

Sorrells said that one person was shot and another was grazed by a bullet.

Both were transported to an area hospital.

The identity of the suspect has not been released at this time.

We will update with additional information as it becomes available.