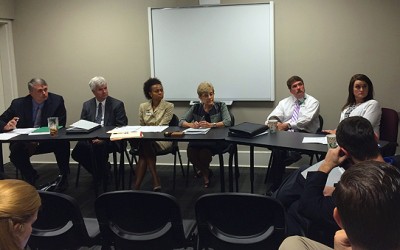 The Polk School District Board of Education met Tuesday morning to formally form a new board that will effectively oversee the completion of a new college and career academy for the county.

The board, known as the Polk County College and Career Academy, Inc. is comprised mostly of business and community leaders and will lead the efforts to secure funding for the project.

Polk School District CTAE Director Katie Thomas was named as CEO of the newly formed board, with local attorney Karen Nissen being appointed as chairperson. Charlie Zebeau was appointed as vice-chairperson, Mary Miller as Secretary, and Britt Madden, Jr. as Treasurer.

“The whole idea behind a college and career academy is that its not led by educators, but that its led by business and industry representatives, parents, and post-secondary educators that really have an interest in making sure that we not only have an educated workforce but we have students that have the skills necessary for the jobs out there today,” said Thomas.

Thomas says over the next month, the board will make their final presentation to secure a $3 million grant that will be used to build new facilities for the College and Career Academy at Cedartown High School.

She says the board should know by December 4 whether they have been awarded the grant.

The system would then move ahead with construction of the new building in early 2015.

The Polk County College and Career Academy is just a part of a number of capital building projects planned for the school district in the next three years.