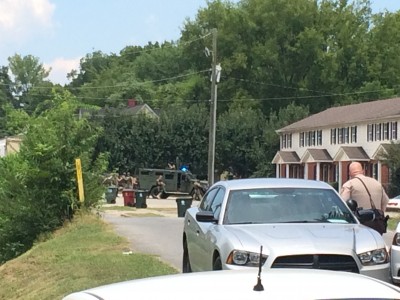 Police in Rockmart have arrested a man who had been holed up in his Jones Ave. apartment since about 10:30 Wednesday morning.

According to Rockmart Police Chief Keith Sorrells, 26 year old Ayron Adams of a Cedartown address was being served warrants for aggravated assault and cruelty to children

“It originally started while serving a warrant,” said Sorrells.

“The suspect had two warrants out of our county and refused to come to the door.”

Police also said that a female who was also at the residence falsely stated that Adams was not there and that they had the wrong man.

Sorrells said that Lakeneria Slaton will be charged with obstruction and hindering apprehension of a criminal.

Due to the suspect’s criminal history and the scope of the warrants, Rockmart Police called for Floyd S.W.A.T. to assist in the operation.

“We felt like there was a strong possibility that he had a weapon in the house,” Sorrells said afterward. “We wanted our officers to be safe and Mr. Adams to be safe.”

Adams and Slaton are both currently being processed at the Polk County Jail.

Rockmart Police say a man is currently holed up in his Jones Avenue apartment in Rockmart after police tried to serve an arrest warrant on the man.

According to Rockmart Police Chief Keith Sorrells, police arrived at the apartment at about 10:30 Wednesday morning after a man refused to come out of his apartment.

No word from authorities if the man is armed or not, but police did say that a person who was in the apartment when the situation began has left the building.

The identity of the man who has reportedly holed himself up in the apartment is not known, but Sorrells said that he has served time on weapons related crimes.

Check back with WGAA for more on this developing story.