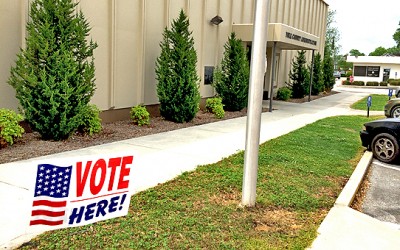 Early voting in the July 26 Republican run-off election for the Polk County Commission District 2 seat wraps up on Friday.

Elections director Karen Garmon told the Polk County Standard Journal that about 460 people had cast ballots in person or by mail as of the end of the day on Monday, with several more likely since that report.

In the May primary, former county commissioners Ricky Clark and Phillip Bentley also sought the District 2 seat, forcing the run-off.

Early voting is being held at the Polk County Administration Building at 144 West Avenue in Cedartown and the Nathan Dean Center in Rockmart from 9:00 a.m. – 5:00 p.m.

Those wishing to vote absentee in the run-off have until election day, July 26 to turn in their ballots in order to be counted.

Voters can check their registration status online at mvp.sos.ga.gov, the Georgia Secretary of State website, as well as polling locations and more.