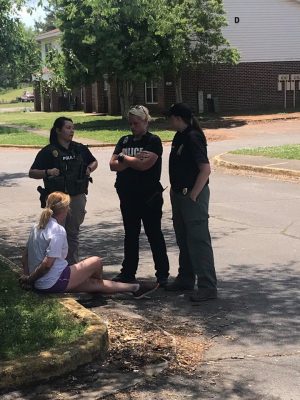 The 51-year-old woman was stopped by police following a look out from Alabama authorities about a vehicle that was taken without permission.

Floyd County PD investigators are assisting with the ongoing investigation at the request of Cave Spring Police Department.

At 11:14 am police were notified of the black Camaro that was taken from Cherokee County, Alabama. It was later observed by an officer on the lot of Dollar General, located at 19 Rome Road.

Officer O’Bryant discharged her weapon at the vehicle engine in an attempt to disable the car, which had reversed at a high rate of speed and struck the Dollar General building. The driver escaped from a window and fled on foot in the direction of the Cave Spring Elementary School.

Officers set a perimeter around the school and neighboring streets for approximately two hours.

Officer Austin Waits (Floyd County PD) observed the suspect running between a set of apartments on Stewart Circle, located near the incident location. She was subsequently arrested without incident. A neighbor reported to police that he observed her taking clothes from a clothes line to disguise her appearance.