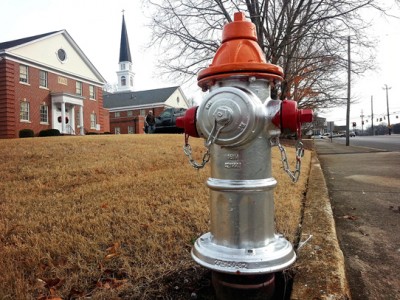 Wondering why our fire hydrants have changed color over the last few months? Here’s why.

In accordance with the National Fire Protection Association Standards, fire hydrants in the City of Cedartown have been repainted to feature a reflective silver base and either a light blue, green, orange or red dome. Beginning in September, hydrants were cleaned and painted by the Polk County Sheriff Office’s Inmate Work Detail. Previously they were either red or yellow.

The reflective silver base aids firefighters when locating hydrants at night and dome color denotes the gallons per minute (GPM) the hydrant produces.  GPM varies from hydrant to hydrant based on different factors. Knowing the GPM of a hydrant allows firefighters to determine the type of tactical response necessary to combat a fire.

Light blue domed hydrants produce 1,500 GPM or above; green, 1,000 to 1,400 GPM; orange, 500 to 999 GPM and red, less than 500 GPM.
According to Fire Chief Sammy Stephens, the uniform color coding of hydrants is not just a City of Cedartown event. He explained that eventually, all hydrants in Polk County will be uniformly painted. “Nowadays with mutual aid agreements and different departments responding to fires, we can know that with this color coding system, any firefighter can tell how many gallons per minute they are dealing when they pull up to a hydrant.”