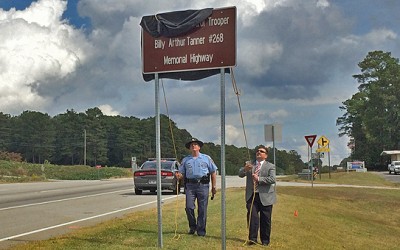 Those driving along Highway 278 on the way out of Cedartown toward Rockmart will see a new sign just past the Polk County Emergency 911 building.  That sign, placed by the Georgia Department of Transportation, was revealed during a ceremony on Tuesday, honoring the late Billy Arthur Tanner, a state trooper from Cedartown who lost his life in the line of duty 44 years ago.

A resolution adopted by the Georgia General Assembly earlier this year officially named the section of Highway 278 between the Cedartown Bypass and the Rockmart city limits as the Billy Arthur Tanner Memorial Highway.  The resolution, pioneered by District 16 State Representative Trey Kelley, was formally presented to family members of Trooper Tanner during a memorial service Tuesday afternoon at Wimberly Hill Baptist Church, Tanner’s home church.

Trooper Tanner was serving at the newly created State Patrol Post in Calhoun in early 1970 when he was responding to render aid to another trooper.  En route, Tanner lost control of his patrol car on Georgia Highway 225 and died from injuries sustained in the wreck on the night of April 11, 1970.

Family members, current and former Georgia State Troopers, local law enforcement, and community leaders gathered for the memorial service at the church and then moved to the sign unveiling, and then a wreath laying ceremony at Polk Memory Gardens after that.

Follow the link HERE to read the proclamation from the Georgia General Assembly honoring Trooper Tanner.