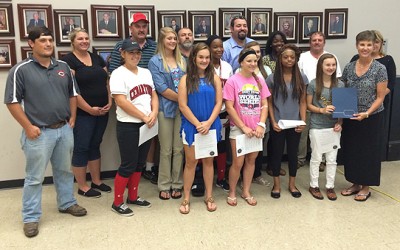 Both players and coaches of the championship team were on hand for the recognition and city manager Bill Fann echoed with his praises for the softball team and its leadership.

“That’s an amazing feat,” said Fann. “It’s hard enough to get to state, much less get to the World Series and go 5-0 in the series, is an amazing accomplishment.”

Fann continued to speak the praises of the Cedartown Recreation Department with the Dizzy Dean baseball team also winning their World Series and the success of the Kimoto Tech Japanese-U.S. Friendship Game.

“Cedartown is doubly blessed this year with two World Series, one for the girls and one for the boys,” Fann said.  “All of that following on the heels of a fantastic event at our own ballpark with the Japanese-U.S. Friendship Game.”

In other business, city commissioners unanimously passed a new blighted property ordinance that aims to go after property owners who have allowed their properties to deteriorate to the point of a nuisance or a public hazard.

Commissioners also passed a beefed up panhandling ordinance, which gives municipal power to cite and arrest if necessary those who are aggressively soliciting money or other services.