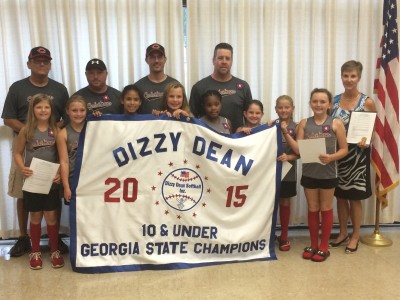 Players and coaches of the Cedartown Recreation Authority’s 10 & Under Girls Softball Dizzy Dean Team were honored by city commissioners during their regular meeting on Monday.

Commission chair Dale Tuck read the proclamation, which spoke of their undefeated run through the district and state tournaments and their journey to South Haven, Mississippi.

The team went 3-2 in the Dizzy Dean World Series, finishing third in the series.

In other business, city manager Bill Fann presented bids for a new vehicle for the police department.

However, Fann recommended that commission accept the next bid of $25,918 of nearby Pioneer Ford in Bremen, citing that the dealership was local and the location would be more favorable for warranty work.