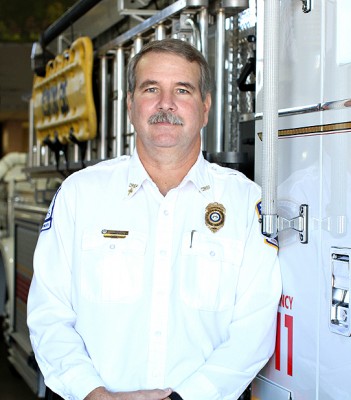 Cedartown Fire Department Chief Sammy Stephens is a firm believer that laughter serves as the best medicine. That might seem to challenge the tough guy stereotype of a man who, for three decades, has worked in public safety. But as he explains it, laughter can satisfy a hurting heart much like water douses a fire.

“I can sit in my office on any given day and only have to wait a few minutes to hear my guys cutting up and laughing. For me, that’s like medicine. That amazes me because think about that for a moment – firefighters, in any community, see the most horrific and heartbreaking display of misfortunes cast upon their fellow citizens,” Stephens explains. “Being able to laugh and express joyfulness is therapy that no value can be attached to. This common bond keeps them mentally healthy and able to respond to the next call.”

It’s that therapeutic laughter that Stephens said he remembers the most as he looks back on his 30 years of service to the City of Cedartown. He is only the fourth chief in the history of the city’s paid fire department, a distinguished rarity in today’s world that Stephens takes pride in. And while he’s been dedicated to his career, the way it came about could be explained as a coincidence fueled by a childhood friendship. “Lee Wilkerson, who retired from the fire department earlier this year, and I grew up knowing each other and had been friends for as long as I can remember. Out of high school, we both worked at Rome Plow and various construction jobs. Lee went on to get hired on at the fire department and after a while, I decided I wanted to work there, too. Every Monday and Friday, I’d drive up to City Hall, my wife, Gayla, and our baby would wait in the car, and I would go in and talk to the city manager and then I’d visit the fire chief and let them know I wanted a job here.”

That method of persistence eventually paid off for Stephens, as he was hired in 1985 and has been reporting for duty ever since. Just one year after he began working, the infamous Goodyear factory fire took place. “I was living in Cave Spring at the time and was called in to work the fire. You could see it from miles away. And I guess it was then that I realized this wasn’t an ordinary job.” Stephens recalls seeing vehicles pull off and clear the roadway as he made his way to Goodyear. From that experience, he knew that his career in public safety and service had begun.

“I’ve been on calls where we’ve brought people back into this world and we’ve watched them leave this world. I responded to a wreck one time and I held a lady’s hand and told her that it would be alright. I remember she looked up at me and we loaded her into the ambulance. I found out later that she died on the way to the hospital and I just remember thinking that I was the last person she’d seen. Sometimes it’s hard calls like that one, other times it’s great to be out somewhere and have someone come up and thank you for helping them.”

Stephens said that he is blessed for the opportunity to serve Cedartown residents. “I am grateful to God for looking after a kid like me and putting me in this job. Of course, I am very appreciative to the City for hiring me and to my family for putting up with me. Lots of times we’d be ready to go somewhere or to a birthday party and I’d get called out. They’ve put up with a lot. I have been privileged to have worked with a great group of guys throughout my career. I have been privileged to have had a great working relationship with present and past city commissioners and past and present city managers. I am very grateful to all.”

Cedartown City Manager Bill Fann said that Stephens is the epitome of a great public servant both on and off duty. “Chief Stephens displays honesty and integrity in all he does and always has the best interest of the entire organization at heart. I will personally miss him because he has been my sounding board for many things and has always given his honest opinion even when it did not agree with my own. I consider him my friend and I wish him all the best,” Fann stated.

Stephens and his wife Gayla have four children and two grandchildren, with one on the way. As for retirement plans, he’s looking forward to traveling with family. Stephens also plans on keeping up with his lawn service business and focusing on his preaching ministry. So in other words, he will stay busy — minus the fires and medical calls — and true to form, he’ll do it with a little laughter.

A retirement reception will be held Tuesday, Dec. 16, from 2 until 4 p.m. at City Hall. All residents are invited to wish him well and offer congratulations on his retirement.