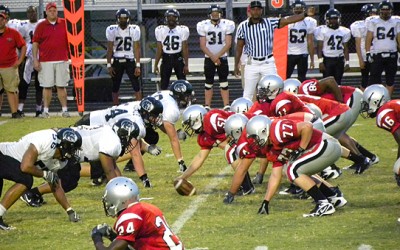 The football season may not officially begin until August 29, but the Cedartown High School Bulldogs will be headed down to Douglas County to take on New Manchester in a pre-season scrimmage game.

Cedartown finished the 2013 season with a 9-2 record, one of them a pivotal game against then region foe Gilmer, that thrust them into a fourth seed in the state playoffs, where they were handily defeated by the number one ranked Sandy Creek Patriots in the first round.

Cedartown lost several starters, including star tailback Nick Chubb, who now is now part of Mark Richt’s Georgia Bulldogs.  The scrimmage Friday will give the Cedartown Bulldogs some opportunities to get some playing time for their starters and younger players.

A realignment of regions following the 2013-2014 school year has placed the Bulldogs in a smaller, more compact region with familiar foes, including Rockmart, Pepperell, Central-Carroll, and Haralson County.

The Dawgs open the 2014 season at home on Friday, August 29 as they host the Hiram Hornets out of Region 5-AAAAA.

Cedartown will be competing in Region 5-AAA.