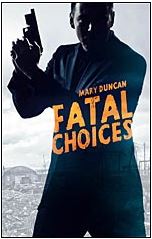 The story is set in the small town of Felton, Ga. The characters are young, inexperienced and hopelessly addicted to drugs. Readers will meet Dick Gerber who, until now, has lived his life with little thought of consequence, but everything drastically changes when he carelessly decides to rip off a well-known drug dealer by the name of Kenneth Melvin.

Fully convinced that he has made a clean getaway, Gerber continues to live his life without concern for a short moment. It doesn’t take him long to realize what a terrible mistake he’s made when his 15-year-old stepson is involved in a drive-by shooting outside his home. He knows right away who’s responsible; however, he’s scared to turn him over to authorities for fear of his family’s as well as his own safety. Fear and desperation set in for Gerber as Melvin continues to threaten his life, causing him to come forward with the truth about the shooting. The police agree to put Gerber and his family in protective custody until Melvin can be apprehended, but a breach in security in the police force reveals the whereabouts of Gerber and his family to Melvin, resulting in horror.

Published by Tate Publishing and Enterprises, the book is available through bookstores nationwide, from the publisher at www.tatepublishing.com/bookstore, or by visiting barnesandnoble.com or amazon.com.