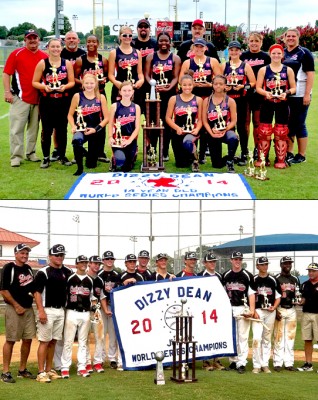 The already planned Fourth Friday Concert and Cruise-In for Friday night now has a championship flavor as members of Cedartown’s two Dizzy Dean World Championship teams will be honored.

According to city officials, a processional is being organized for the two teams, the Cedartown Bulldogs 16U baseball team and the Cedartown 14U softball team, which will bring them down Main Street from the old Enmark gas station beginning at 6:00 p.m. and end in front of Polk County Courthouse No. 2.

Following the processional down Main Street, city officials will be honoring the players and coaches in front of the courthouse steps for bringing home World Series championships.

The festivities are part of a new series of concerts planned for downtown Cedartown this year.

Organizer Jennifer Hulsey says if you had fun last month, you will certainly enjoy the concert this time.

“If you had fun last time, you’re going to have even more fun this time because we are adding another band,” said Hulsey. “Prior Station will be playing for us and Khaotik will be back by popular demand.”

Those who attend the concert and cruise-in are asked to bring a new toy to donate to the Cedartown United Fund for Christmas in July to help area children.