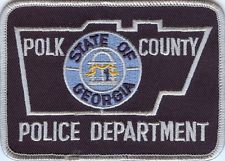 Polk County Police recently arrested a woman who reportedly led police on a brief pursuit while driving the wrong way on a divided highway.

According to reports, Polk 911 advised police that someone had called about a wrong way driver on Highway 278 near Wimberly Hill Road.

The driver was observed driving westbound in the eastbound lanes.  After the driver refused to stop, officers boxed the vehicle in, forcing her to stop after a pursuit that lasted just over two miles.

Polk County Police arrested 42-year-old Starla Haygood of a Silver Thorn Way address on numerous charges, including fleeing or attempting to elude police, DUI alcohol, driving on the wrong side of a divided highway, reckless driving, driving too fast for conditions, and tag light violation.

She was booked into the Polk County Jail early Sunday and released later that morning on a property bond.