Rockmart Police have announced an arrest made in connection with threats made against Polk County schools.

According to a press release from Rockmart Police Chief Keith Sorrells,

Polk School District officials contacted law enforcement and an investigation was started that resulted in the arrest of a 17 year old junior at Rockmart High School, Zoriah Erin McCrea of a Rockmart address.

We would like to commend the teachers and school staff for keeping students calm and secure in their classrooms, Polk School District for their communication with parents, and parents for their patience with law enforcement and allowing us to do our job. While a late student release was inconvenient, our goal was the safety of our children.

One person is in custody following a Thursday lockdown of all schools in the Polk School District after a threat of violence via a social media post was brought to the attention of law enforcement.

All schools were placed under a Code Blue at approximately 12:45 Thursday afternoon by the school district in cooperation with local police and sheriff’s office personnel. 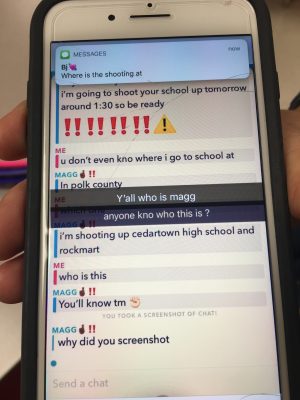 Cedartown Police Chief Jamie Newsome said that the Snapchat post mentioned schools on both sides of the county, which prompted the countywide lockdown order.

“We wanted to make for certain that there was no threat on any campus,” Newsome told WGAA Radio. “The schools were on lockdown, thus the students were safe. The mobility was restricted so it was a controlled situation.”

Newsome said the decision to hold the students for nearly 4.5 hours Thursday afternoon was a collective one, in order to allow a thorough investigation to take place.

A statement from the Polk School District late Thursday night said that the suspect has been apprehended and is in custody.

Cedartown Police, along with a collective group of other law enforcement agencies, had detained and interviewed a person of interest in the incident on Thursday afternoon.

It is not known at this time the identity of the suspect or the specifics on any charges that may be levied against the suspect.

The investigation into the incident is continuing.

From City of Cedartown: According to Cedartown Police Chief Jamie Newsome:

Earlier this morning, police were made aware of a SnapChat message which threatened violence against Polk County schools. Chief Newsome said police immediately responded to the situation. THERE IS NO ACTIVE THREAT. As a precaution, police from all departments across the county have been stationed at every school in the Polk School District, Newsome said.
Again, THERE IS NO ACTIVE THREAT. Police are currently investigating the situation.

From Rockmart Police Department: ALL SCHOOLS HAVE BEEN PLACED ON A CODE BLUE ALERT (SOFT LOCK DOWN). WE ARE CURRENTLY INVESTIGATING A THREAT THAT WAS POSTED VIA SNAPCHAT. ALL STUDENTS ARE IN THEIR CLASSROOMS AT THIS TIME. PLEASE DO NOT GO TO THE SCHOOL TO TRY TO PICK UP YOUR STUDENT AS THEY WILL NOT BE RELEASED.

Polk County Schools are currently on lockdown, according to Superintendent Laurie Atkins. According to a statement from the superintendent, “We are receiving notification from several students that there is a potential threat of school violence. We have currently issued a Code Blue for all schools. Code Blue places schools in Lockdown Mode. Students will not be allowed to leave campus, and visitors will not be allowed to enter any building at this time. Law enforcement is currently investigating this matter. We will send updates with further information.”