A person of interest in a homicide investigation who was being held in jail on a weapons charge is now out after the warrant charging him with being in possession of a firearm by a convicted felon was being recalled.

According to a media release from the Polk County Police Department, during the investigation into the death of Tammy Wolfe, detectives ran Roe Dale Bowman’s criminal history and also ran a Google search on him.

The release states that detectives discovered that Bowman was convicted of aggravated assault in Polk County Superior Court in 2001, according to the Google search.

However, the arrest and conviction was not on his criminal history provided by the Georgia Crime Information Center.

An inquiry of records at the Polk County Jail confirmed that Bowman had been arrested on aggravated assault in 1999.

In addition, detectives received a copy of the conviction and sentence from the Polk County District Attorney’s office.

With this information at hand, a warrant was issued for the arrest of Bowman on that charge.

Bowman reportedly claimed to officers that he had been pardoned of the offense and had a legal right to carry a firearm.

That information was not on his criminal history, according to Polk County Police Chief Kenny Dodd.

Upon further checking with the State Board of Pardons and Paroles, it was discovered that he had indeed been pardoned in March 2013 and was granted full rights thereof.

Due to that fact, county police detectives contacted the Polk County Magistrate Judge, and the warrants were recalled and Bowman was immediately released. 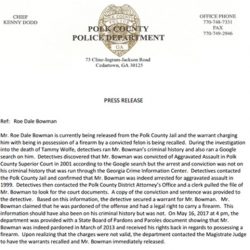