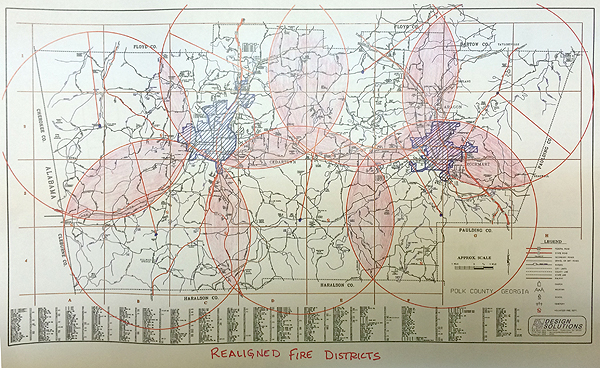 If Polk County commissioners are in agreement come next month, voters in Polk County could vote on a complete overhaul of the county fire department, including relocation and elimination of some fire stations.

According to County Manager Matt Denton, the plan calls for full-time paid fire fighters to be staffed at the county fire departments, which according to the plan would be reduced from nine to seven stations over the next 20 years.

“Right now there’s nine volunteer stations, and those of course were established by communities,” said Denton.

“There is a lot of overlap as several of the stations are relatively close to each other and to be more efficient and effective with coverage being a paid fire department, we would realign the districts to eliminate them down to seven.  We could get 100% coverage with little overlap doing that.”

The plan would result in the relocation of every volunteer fire department in the county with the exception of the newest station at Lake Creek.

Denton says the plan as it stands now would staff two 24 hour fire fighters for each station, with the costs of construction and new equipment to be supplemented by various grants.

“Overall, it would create a savings of less equipment to upkeep and purchase,” said Denton.

“The second five years would incorporate two more men for the other three stations for a total of two men at seven stations 24/7, and after that we would be adding another man 24/7 at each station in phases three and four.”

Commissioners are expected to vote on the matter sometime in August so the question can be put to voters on the November ballot.