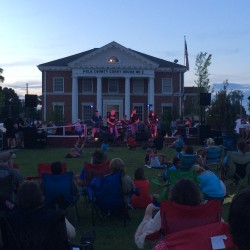 Rock and Roll, country, and pop music filled the streets of Downtown Cedartown Friday night as close to 200 people gathered for the first ever Fourth Friday Concert in conjunction with a Classic Car Cruise-In.

“The city was talking about how to get people here downtown and just enjoy themselves and listen to good music and have fun,” said Downtown Renaissance volunteer and event co-chair Jennifer Hulsey.

“It is a series, our goal is three for this year.”

Three downtown concerts have been planned for downtown, including this past weekend’s music from the band “Khaotik”

The evening got underway with a Classic Car Cruise-In at 5 p.m. and the concert at 8 p.m.

Food and drinks were provided by members of the Mt. Sinai Church and Galilee Baptist Church.