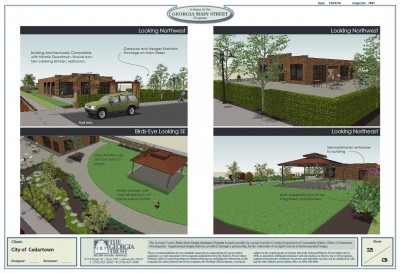 City Commissioners viewed a set of conceptual drawings for a proposed event center in the heart of downtown Cedartown during their February 2 work session.

City Manager Bill Fann stressed that the proposed event center is in the infancy stage of planning. It has not been approved by commissioners and there is no set timeline of completion. “We basically presented the drawings to the commissioners last night to get their input. While all of the commissioners liked the drawings, nothing has been finalized or voted on and probably won’t be for quite some time. This was just a basic introduction to the concept,” Fann said.

As shown by the drawings, the event center would be located across from the Lankford Motor Company, adjacent to the Silver Comet Trail, on South Main Street. The Lankford family of Cedartown donated the land to the City on the condition that it would be used for a public space. The City purchased additional property located behind the donated parcel in order to have ownership of the entire block.

Commissioners are excited that the project would combine both the downtown Cedartown area and capitalize on the proximity of the Silver Comet Trail. “That’s something we can all agree on. We’ve not used the Silver Comet Trail to our advantage to market our City like it could be marketed. If we were to build an event center like this, it would open the doors to so much potential. The downtown Cedartown segment of the trail would be a destination, rather than just a pass through like it is now. We would have a public use center and ample parking to facilitate that,” Fann said.

The idea of an event center began to take shape in 2014, as local officials, including State Representative Trey Kelley, Downtown Cedartown Director Ramona Ruark, City of Cedartown Commission Chair Dale Tuck and Fann, met with five state-level officials heavily involved in economic development. “It was a situation where we all met to discuss several projects and we asked them what their recommendation would be for the property on South Main. The answer was immediate: we needed to use the space for an event center and use it to help promote the trail,” Fann explained.

The conceptual drawing stipulates that the facility should be architecturally compatible with existing downtown buildings and that it should include a catering kitchen, restrooms and meeting spaces. Large roll-up doors and outside seating is another key feature of the proposed center. The doors could be rolled up during warm weather to create a seamless transition between indoor and outdoor space. The area surrounding the building would include plenty of green space and a covered pavilion for public use.