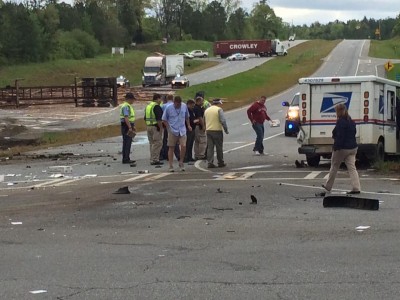 From the Georgia State Patrol:

On April 12, at approximately 1:15 p.m., a log truck was traveling northbound on GA 1 Bypass at Collard Valley Road when it ran the red light and struck a United States Postal Service delivery truck in the front left corner.

After impact, the log truck crossed the median and overturned. The logs separated from the truck and covered the roadway. The postal service driver was ejected from the vehicle and pronounced deceased on scene. The driver of the log truck was arrested for an outstanding warrant for failure to appear. Charges are pending the completion of the investigation.

A Cedartown woman has died after being fatally injured in a wreck involving a log truck and U.S. Mail truck on the Cedartown Bypass (U.S. 27) and Collard Valley Road.

According to Polk County Deputy Coroner Marty Robinson, 52-year-old Gina W. Jackson, an employee with the U.S. Postal Service, was pronounced dead on the scene at approximately 1:50 PM.

Preliminary findings by the coroner’s office indicate that Jackson was ejected from her mail truck upon impact and suffered blunt force trauma.

Robinson said her body is being sent to the GBI Crime Lab in Decatur for an autopsy.

As of 4:15 PM, all lanes on the Cedartown Bypass continue to be blocked as the Georgia State Patrol continues their investigation.

We are still awaiting more information from the Georgia State Patrol, who is in charge of the scene.

Cedartown Police Chief Jamie Newsome says all lanes of the bypass will be closed through the evening hours and possibly past dark.

Motorists are advised to avoid the area if at all possible.