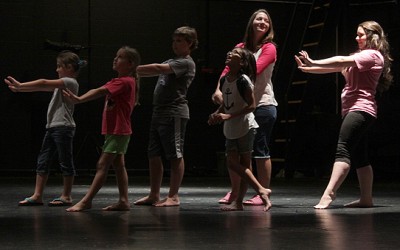 CEDARTOWN, Ga. – To borrow a phrase from a familiar Disney show tune, the cast of the upcoming Disney’s Beauty and the Beast performance invites local residents to “be their guest” in Cedartown on Aug. 15 and 16.

The Cedartown Theatrical Performers’ Company and the Cedartown Performing Arts Center, in association with Lundy Christian Academy and Cumberland County Playhouse will present Disney’s classic Beauty and the Beast on Friday, Aug. 15 at 7:30 p.m. and on Saturday, Aug. 16 at 2:30 and 7:30 p.m.

This performance marks the 10-year anniversary of the Cedartown Theatrical Performers’ Company (CTPC). Known for their spot on acting skills, amazing set design and detailed down-to-the-last-button costumes, the CTPC has presented a decade of solid, crowd-pleasing performances like Treasure Island, Annie, The Wizard of Oz, Into the Woods, Grease!, and The Sound of Music. For their 10-year anniversary, CTPC organizers decided to bring back one of their most popular performances and present Beauty and the Beast once again.

Will Lundy, CTPC spokesperson, said that the decision to present the Disney classic a second time was a no-brainer. “We had such great success with the first performance of Beauty and the Beast, we thought it would be fitting to bring it back as a celebration of our 10 years. This performance has dozens of roles – some major lead roles and plenty of smaller roles – it’s a great way to involve seasoned actors and those just beginning to try out their acting skills,” Lundy said. “This show is also known for its amazingly realistic set designs and costumes. It really brings the story of Belle and the Beast to life, right in front of our audience’s eyes. Young children absolutely love this show, and our older audience members do too. It is truly a family-oriented production.”

The local cast of 34 actors and actresses – ranging in age from seven to 40 – have been practicing since July. One of the show directors, Brittany Harris, said that rehearsals have been going well.

“The cast is very excited about this show. Director Lee Lundy and I operate using our experience that we have gained through our time in professional theatre. We model our rehearsals and our performances after that and we feel that it helps the actors tremendously. They start taking themselves and the process of acting more seriously. They begin to take on more responsibilities and start to blossom as young professionals. Yes, we are teaching them theatre and acting, but they can also apply these lessons to any career.”

The cast have put in long hours and daily five-hour rehearsals to polish each aspect of the performance. Harris says the one thing that they desire is support from the local community.

“We would love to have everyone come out to support the kids and their hard work. They have put their all into it, and we would love to see the community involvement for this production and the arts in general. That’s been our goal all along, to cultivate performing arts in Cedartown.”