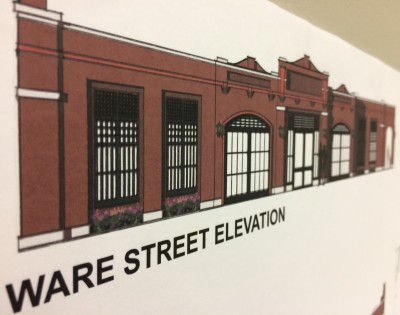 A proposed new event center for downtown Cedartown was discussed during a Cedartown City Commission work session on Monday.

Slated to be named the “Jim & Jean Lankford Family Event Center,” the 4200 square feet complex would be located on the corner of Main Street and Ware Street and would be based on the design of the former Brewster General Mercantile building.

Officials from Cevian Design Labs told city commissioners that the project is still in the schematic design phase, focusing primarily on the floor plan, building layout, and elevations.

Commission chair Dale Tuck said that she hopes the project will go out for bids as early as March 2016 and then break ground by late Spring of next year.

No action has been taken on the proposed project and no cost estimates have been released at this time.

Commissioners also held a public hearing for the fiscal year 2016 budget for the city.

With no one speaking for or against the proposed budget, a vote for approval will be held at the December 14 meeting.