CEDARTOWN, GA – Cedartown’s Kimoto Tech, Inc. announced on July 25th a $6 million capital investment project that will allow the film-coating company to progress with the advancement of new technologies and sustain their global competitiveness.

Kimoto Tech, Inc. (KTI) is a wholly owned subsidiary of Kimoto Co. Ltd, headquartered in Saitama, Japan. The Cedartown location consists of more than 360 acres with an 110,000 square foot manufacturing and corporate office facility. Cedartown is also the site for Kimoto Tech’s 13,000 square foot Research and Development Center. This facility houses some of the most advanced measuring and analytical instrumentation available — all devoted to the development and testing of new film coating products and the technology required to manufacture them.

“We are very excited about Kimoto’s capital investment project,” said Cedartown City Commission Chairman Larry Odom. “Kimoto has been and continues to be a successful model of an industry that not only excels in their field, but also serves as an example of a fine community partner and neighbor. The commission and the City of Cedartown looks forward to working alongside Kimoto in this project and in the future.” 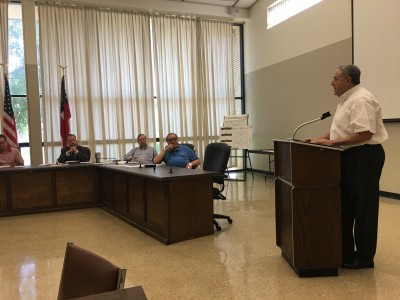 “The rapid advancement of technology in recent years has changed the landscape of manufacturing considerably. Kimoto Tech, Inc. is making every effort to remain relevant with ever changing demands for optical grade and specialty coated films. These two enhancements to our Cedartown manufacturing operations will permit Kimoto Tech, Inc. to remain competitive in domestic and international markets.”

“These vital public institutions are making this investment possible through tax incentives in support of local industry,” Leal said. “Capital investment by public corporations coupled with local government support of industry will always remain key ingredients in sustaining a vibrant community. Kimoto Tech, Inc. wishes to express gratitude to all members of these two organizations for assisting Kimoto Tech, Inc. in establishing a future within Polk County and the State of Georgia.”

Georgia Department for Economic Development Commissioner Chris Carr also expressed gratitude to the local boards and commended Kimoto for continuing to build on a decades-long operation.